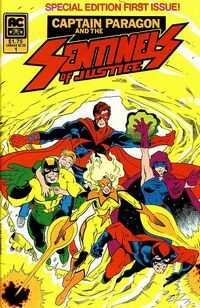 Paragon, or Captain Paragon, is a fictional superhero character published by AC Comics currently as a supporting character in Femforce. This character initially had his own book, then was with the Sentinels of Justice.

Captain Paragon is married to Femforce leader Miss Victory. He is a frequent ally of the team.