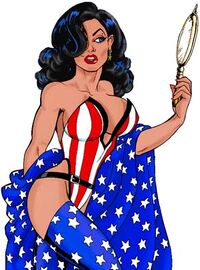 Yankee Girl's secret identity is Lauren Mason, a heroine from the Golden Age of comics that AC revitalized and incorporated into the modern world. Her powers were originally bestowed by the wizard Merlin himself in order to produce a champion during the dark times of World War II.

In the AC Universe continuity, Yankee Girl and several other Golden Age heroes volunteered to enter suspended animated sleep at a top secret vault to be summoned again when the world needed them. During the "Shroud Wars" storyline of Femforce, these heroes were awakened and were initially referred to as the "Vault Champions". Following the Shroud Wars, these heroes began their crime fighting careers anew in the modern era. Yankee Girl's powers are derived from magic, granting her the powers of flight, super-strength, and invulnerability.

Yankee Girl is still essentially a young woman who grew up in the 1930s and 1940s, and is depicted as being relatively naive in regards to the modern world and how society has changed. In various Femforce issues, Yankee Girl served as a spokesmodel for "Dunkies", a popular snack cake, along with Span-X, a fabric tailored for superheroes, with humorous results.

Yankee Girl is a superhero who appears in the Femforce comics published by AC Comics. The character is based on an obscure Golden Age superheroine, who appeared in one issue of Dynamic Comics #23 (November 1947), published by Harry "A" Chesler.